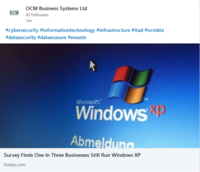 Windows XP still in use!

Security vulnerabilities affecting older versions of Windows and other software have been the cause of massive data breaches and enabled the spread of devastating malware and ransomware attacks including WannaCry and NotPetya. Yet, a shocking number of businesses are still running outdated operating systems.

As if the prominence of Windows XP wasn't enough of a concern, the presence of Windows 7 is also widespread across the businesses surveyed. Nearly four in five companies, 79 percent, reported using Windows 7 machines. While the operating system is still supported by Microsoft for the time being, its end of service date is coming fast. Microsoft plans to end support for the operating system on January 14, 2020. After that point, computers running Windows 7 will no longer receive necessary security updates to address major vulnerabilities.